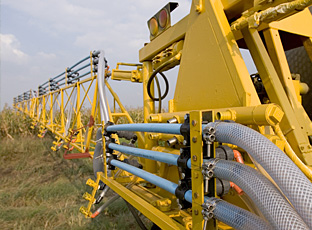 Time is the friend of the innovative company

At a commemorative event held on 13 September 2003, Neville Crosse - the Chairman of the Omnia Group - used a quote by Warren Buffet, an American business magnate, investor and philanthropist: “Time is the friend of the wonderful company and the enemy of the mediocre”. The quote certainly carries weight as Warren Buffet is widely considered the most successful investor of the twentieth century, ranked as the world’s wealthiest person in 2008 and also nominated as one of the most influential people in the world by the American magazine Time.

For the purpose of this article, the quote would also be used, but with a slight twist: “Time is the friend of the innovative company and the enemy of the one that misleads”. Throughout time and in the realm of fertilizer and plant nutrition, creativity and innovation played a phenomenal role in the development and even survival of the human race.

Fritz Haber and Carl Bosch (respective Nobel prize winners in 1918 and 1931), who developed the process to capture nitrogen from air to produce ammonia, are regarded as the most influential persons with the most important invention of the twentieth century (Nature, July 29, 1999, p.415). They have probably had a greater impact than anyone in the last 100 years, including Hitler, Ghandi and Einstein. It “enabled the population explosion”, driving the world’s population from 1.6 billion in 1900 to 6 billion in 2000. In the last 200 years, only the germ theory of disease by Pasteur & Koch (developed between 1868 and 1876) had an impact on mankind that rivals the one of the Haber-Bosch process.

Norman Ernest Borlaug, another Nobel laureate regarded as the father of the Green Revolution, summed up the role that nitrogen fertilizers played in the Green Revolution by using a memorable kinetic analogy: “If the high-yielding dwarf wheat and rice varieties are the catalysts that have ignited the Revolution, then chemical fertilizer is the fuel that has powered its forward thrust” (Smil, 2002).

Since the late 1950’s, the share of the world’s population suffering from hunger and malnutrition has dropped from about one-third to one-seventh. Successes in agricultural development contributed substantially to these gains by feeding billions of people - by increasing food supplies, reducing food prices and creating new income and employment opportunities (International Food Policy Research Institute, 2010).

It is clear that fertilizers and technological development on the farm played a significant role in feeding the world. If the USA statistics are taken as an example (Figure 1), one can see that fertilizer use increased steeply and linearly, increasing efficiency and enabling the farmer to feed more and more people on less land. This is a challenge that is repeating itself in this century (this will be expanded on in another article in this magazine). As a matter of interest, the use of fertilizers in South Africa increased from approximately 800,000 tonnes to just under 2 million tonnes over the same period. 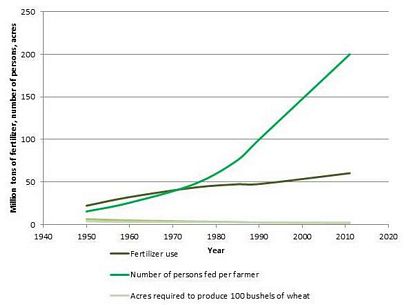 Against the backdrop of the world stage, Omnia started off with creative and innovative founders Dr Joachim Winkler and Mr Willie Marais. Already in 1951, before Omnia was founded, they started marketing trace element blends under the commercial brand of “Fortifika”. This was way before its time, as the rest of the world was only starting to talk about the application of individual trace elements such as copper and zinc in fertilizer programmes. Note that trace element chelates were only discovered in 1951.

In 1953 Omnia Farmers' Services (”Omnia Boeredienste”) was found, based on the marketing of especially lime, but also farm chemicals. Much thought and development were devoted to the handling and spreading of bulk lime. This mechanical development paved the way for the first fertilizer factory at Sasolburg in 1967. This factory was built by a German war veteran Heinz Detloff Wismer, who was in charge of a successful workshop battalion of a tank division with 2000 vehicles (under most adverse conditions) during the war: innovation personified. 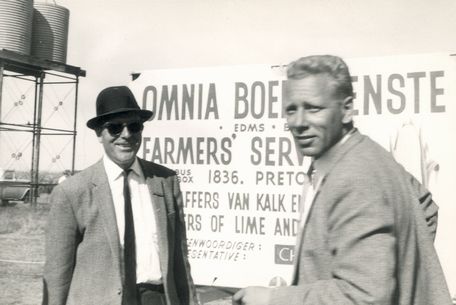 During the 1950’s and 1960’s, farm mechanisation was also the order of the day in the rest of the world. In 1954 the number of tractors exceeded the number of horses and mules on the farm in the USA for the first time and 96% of all cotton were harvested mechanically.

In this same time frame, ammonia and liquid fertilizer were developed for application on the farm in the USA. In 1972 Omnia also started manufacturing liquid fertilizer. In fact, Omnia mastered this technology to such an extent that they built plants in the United Kingdom. Ammonia application with sophisticated equipment soon followed in 1974.

In 1980 Omnia listed on the Johannesburg Stock Exchange (JSE), with a share price of 50 cents! There was no question about Omnia’s technological advantage at this stage. In 1982 Omnia invested in its own nitrogen facilities in the form of nitric acid technology and nitrophosphates. Although the technology for nitrophosphate production was already available in 1929, it only became popular in the 1950’s, when sulphur became a scarce commodity. Omnia adapted this clean, efficient technology and further developed the process for its own purpose. A patent on this technology was filed in 1981 by an employee and later managing director, mr P.L. Van Schalkwyk (Figure 3).

During the 1990’s, bio-technological enhancement of seeds and plants was the mainstay and the first genetically modified (GM) foods were approved in 1994. The first weed and insect resistant biotechnological crops, i.e. soybeans and cotton, were made available commercially in 1997. Omnia also investigated this avenue by establishing a seed company, Carnia Seed, from 1988 to 1997, but decided to disinvest in this technology to focus on plant nutrition.

In 1993 Omnia was listed for the first time as a top 100 company of the JSE. During the 1990’s, Omnia eagerly followed the development of new technology. In 1995, Omnia Specialities was established and the OmniSap® technology commercialised. Omnia started producing its own potassium sulphate in 1996 and, as said, its own technical MAP in 1997. A new state of the art granulation plant, based on nitrophosphate technology, was also built in the same year. In 1998 Omnia started to manufacture water soluble blends for the Specialities division.

The nineties was also the period when information technology, global positioning systems (1994) and precision farming developed in leaps and bounds. Omnia launched its OmniPrecise™ division in 1998. This unit developed exponentially, currently covering more than 200,000 ha with different services per annum, but intensely focusing on the use of geographic information systems (GIS) and farm risk management. 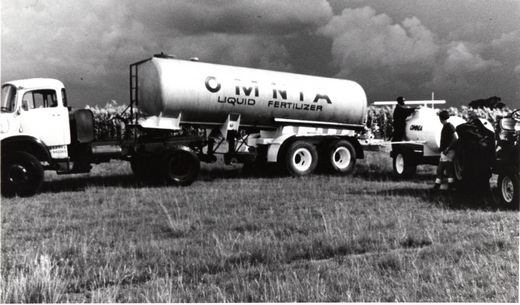 From the seventies to the nineties, conservation or sustainable agriculture received increasingly more attention - from no-till, to low-input sustainable practices (LISA), to conservation tillage. Omnia takes these principles and developments to heart and have recently established a formal conservation agriculture unit, focusing on different aspects of sustainable agriculture such as crop rotation, tillage practices and pasture management. Omnia’s Agronomic Research and Development also devotes many resources to new technology development for better management of nutrients and water. The concepts of nutrient use efficiency (NUE) and water use efficiency (WUE) are prime focus points.

Over the last 13 years, Omnia maintained its creativity and innovation. OmniBio™ was established in 2000 to investigate and better understand soil biology. In the process a range of own soil conditioners was developed. In 2003, application for a new patent was filed for the manufacture of calcium nitrate and Chemtech was established within Omnia. Chemtech is a range of world class, accredited laboratories specialising in fertilizer, water, plant sap and soil analyses. Last year, a new world class nitric acid plant worth 1.4 billion Rand was commissioned, on time and within budget - a huge achievement for Omnia. 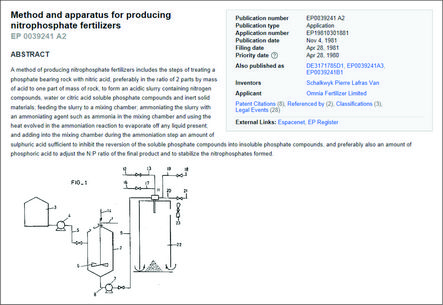 Still innovation carries on in Omnia. Huge investments are made to leverage knowledge for the mutual benefit of Omnia and especially its most valued customers. Perhaps other companies are quick to claim benefit without real investment in knowledge, creativity or innovation. Often their delusion is transferred in the form of risk and loss on farm, exposing their inadequacy. To use another quote from Warren Buffet: “Price is what you pay. Value is what you get.” Omnia strives to invest in creativity and leveraging knowledge to add real substantial value on the farm that far exceeds price. Join Omnia Fertilizer - time is indeed our friend...

Fertilizer use and price in the USA. 2013. Web based reference: http://www.ers.usda.gov/data-products/fertilizer-use-and-price.aspx#26720

Fifty and forward. A fifty year commemoration internal publication by the Omnia Group, 2003.