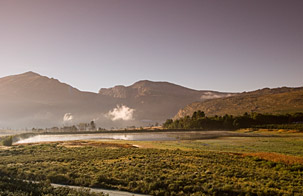 Rhizovator™: The root of sustainable production

With a growing world population that needs to be fed and an increased social and urban demand for land, it is no wonder that there is an urgent call for a second Green Revolution to increase the efficiency of food production per unit area in a sustainable way.

Within the Green Revolution there is also a Brown Revolution, which focuses on soil health and the root system. It aims to find ways to enhance root growth as well as nutrient and water use efficiency, including resistance to disease. The Brown Revolution is often called the only sustainable response to the global food crisis.

International research found that creating a healthy environment for roots to thrive in and adding natural stimulants could enhance root growth and proliferation dramatically, even doubling water use efficiency and boosting nutrient uptake by up to 400%.

OmniBio™ has developed a range of products under the trade name Rhizovator™ that consists of various stimulants, for instance humate, kelp, amino acids and even microbes, as well as other new and exciting components. These products are tailor-made for specific crop groups and regions. On a case-by-case basis, specific micronutrient combinations are also added to suit site-specific requirements.

The Rhizovator™ products have not only been tested in several greenhouse pot trials with grains and canola, but also in the field on other crops such as table grapes, citrus, soybeans  and cotton.

Effect of Rhizovator™ on crop establishment in the eastern regions

During the 2016/17 season, the new range of Rhizovator™ products were tested in field trials in the Eastern grain producing regions of South Africa. 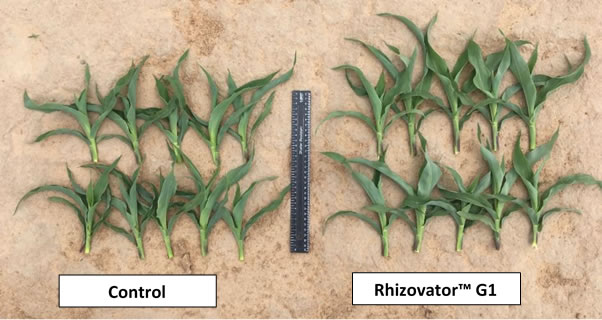 Rhizovator™ G1 was applied on maize at planting at a rate of 4 ℓ ha-1 near Ficksburg, in the Eastern Free State, to demonstrate the product’s benefits in improving crop establishment. Treated and untreated strips were alternated, and replicated 10 times. Plants were sampled from each strip three weeks after emergence (V2). Plant height, leaf chlorophyll and aboveground biomass (dry) were measured. The sampled plants were then submitted for tissue analysis so that the total nutrient uptake could be determined. Results were statistically analysed using a paired t-test. There were significant improvements (>90% confidence) in maize growth and uptake of macronutrients (Figure 1 and Figure 2)

As an investigation, a few strips of Rhizovator™ PC at 4 ℓ ha-1 were also applied on dry beans near Ficksburg, and soybeans near Leslie, Mpumalanga. For both crops a considerable increase in growth was observed (Figure 3 and Figure 4). 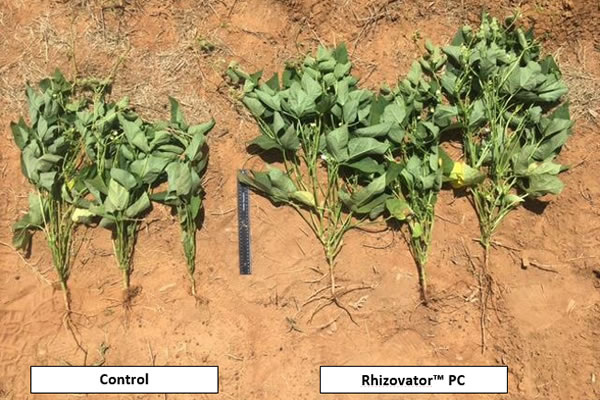 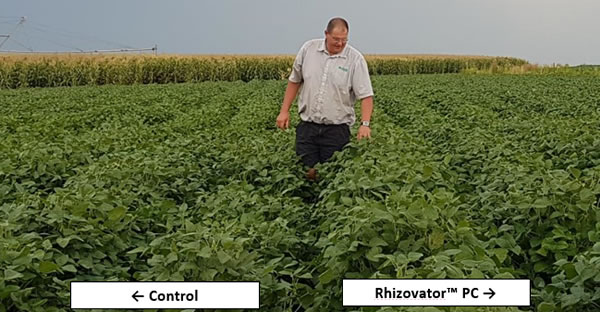 In the past 12 months several Rhizovator™ trials were conducted in the western region. Here are some of the very positive results:

The effect of Rhizovator™ G1 was visible from emergence with a statistically significant increase in the plant population after germination (p=0.048) as can be seen in Figure 5. 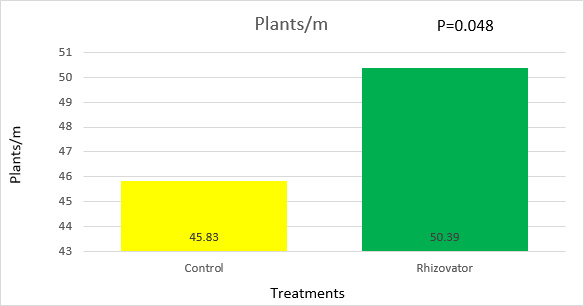 Figure 5: Plant population of Rhizovator™ treated plants versus the control. 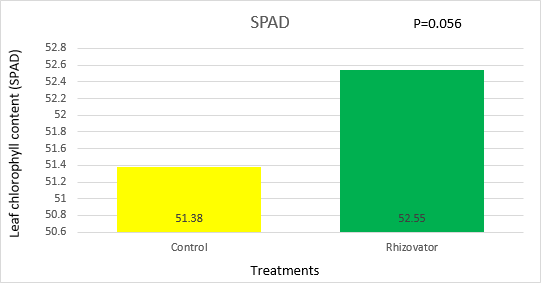 Figure 7. Chlorophyll content in leaves of treated and untreated plants

OmniSap® samples were also taken at this stage and it was quite clear in the results that Rhizovator™ G1 increased the uptake of macro and micronutrients, as illustrated in this example of paired strip no 9 (Figure 8). 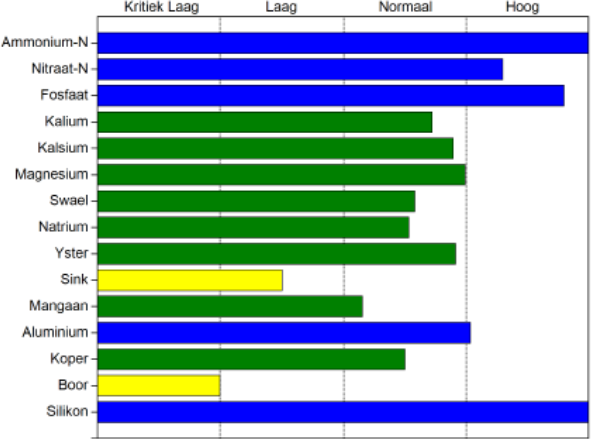 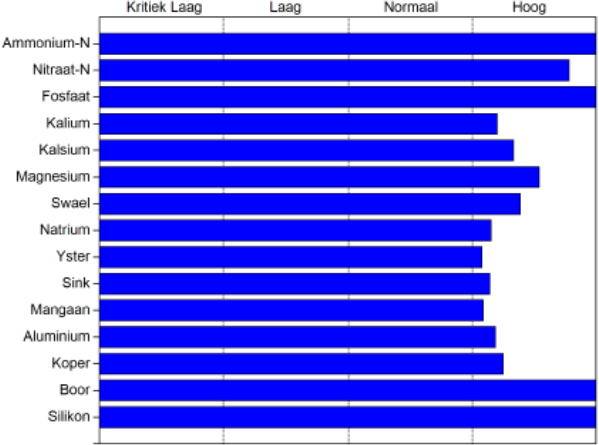 At harvest the Rhizovator™ treated strips showed a statistically significant increase in yield of 320 kg/ha on an already very high yield of 9.85 t/ha! This was at a confidence level of p=0.000012. This means that there is a 99.9% possibility of increasing the yield of wheat under irrigation when applying Rhizovator™ G1. 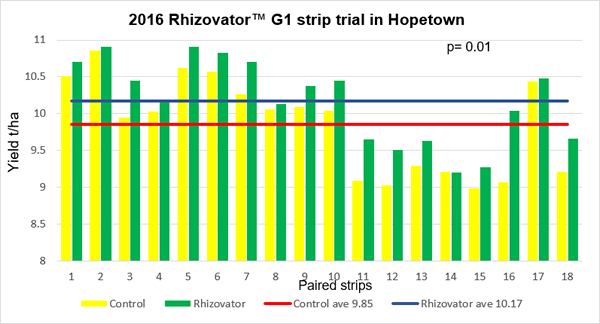 Soyabean Rhizovator™ PC strip trial on a farm in the Bultfontein district.

At this site the effect of the Rhizovator™ was also very clear from the start with much better growth throughout the season. This was proven by measuring the foliage ground cover with the Canopeo app which takes a picture and gives a value of coverage. The Rhizovator™ PC had a statistically significant increase in cover (p=0.1). The effect was also visible in photos taken of the roots at the four-leaf stage. The astounding result can be seen in Figures 10 and 11 below. 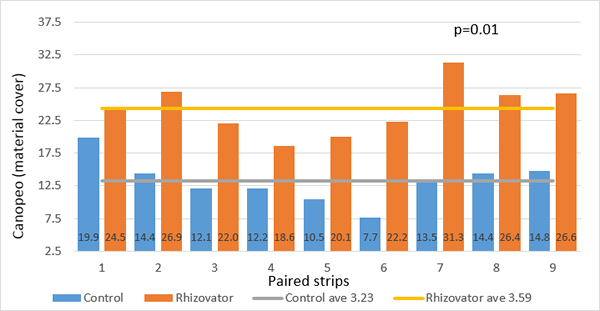 Figure 11. Differences in treated and untreated soya plants at the four-leaf stage.

As in the wheat trial, the better uptake of nutrients could also be seen in OmniSap® samples taken at the four-leaf stage.

At harvest the Rhizovator™ PC showed a statistically significant increase in yield (p=0.01) and again the increase was constant through al nine paired strips (Figure 12).

Figure 12. Yields obtained in the Rhizovator™ soyabean trial at Bultfontein.

During the past two seasons Rhizovator™ was tested on several crops in the Western Cape on cereal as well as permanent crops. Great results were obtained in all instances, indicating how different climate regions and even cultivars react to this product.

Rhizovator™ was developed to specifically target the rhizosphere of plants as most root proliferation is shallower than 20 cm. If the root density is enhanced, water use efficiency (WUE) and nutrient use efficiency (NUE) increases drastically as the rhizosphere influences water utilisation, nutrient availability, root exudates and microbial activity.

Figure 13: More emerged plants can be seen on the right where the Rhizovator™ G2 was applied compared to the control on the left, where much more open soil can still be seen. 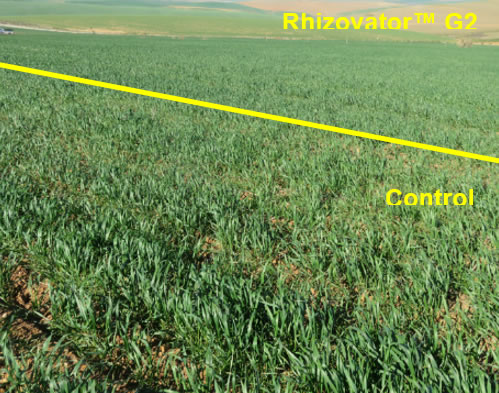 Figure 14: The control plants in the front of the picture are much more sparse than the Rhizovator™ G2 plants showing more lush growing plants towards the back. 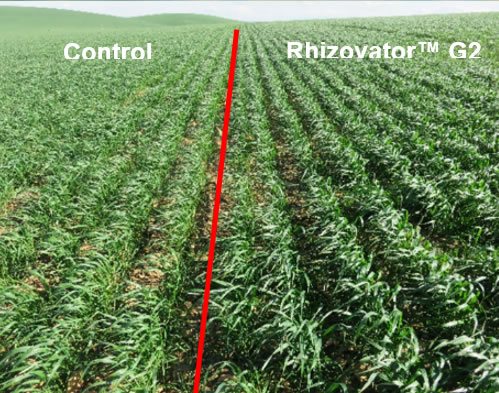 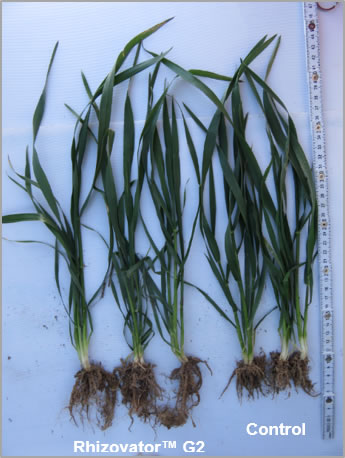 Figure 16: The Rhizovator™ G2 plants on the left show better vegetative growth as well as root mass and taller plants compared to the control plants on the right. Root growth on the farms used in the trial for the Southern Cape showed a 23% increase on root mass at a confidence level of P=0.04. 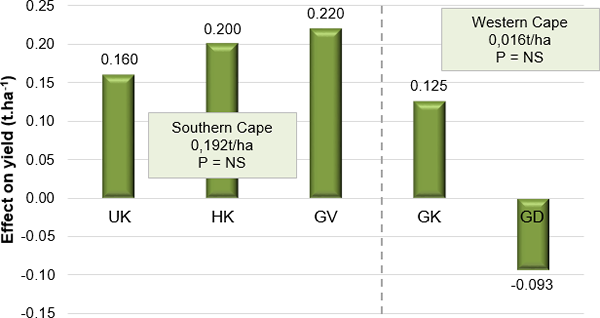 Figure 17: Rhizovator™ G2 produced 192 kg grain.ha-1 on average in the Southern Cape, which makes it economical to apply even though it was not a statistical increase. This increase was the effect of the increase in root mass, which also had a positive response on ear mass – increased ear mass of 9% were observed (P = 0.15). 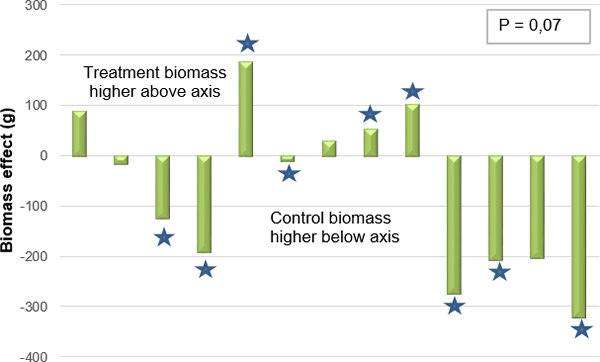 Figure 18: Although the Rhizovator™ G2 treated plants initially produced higher biomass, this trend did not continue as the plants matured, as can be seen in in the graph where the control plants’ biomass were statistically higher (P = 0.07) compared to the treated plants’ biomass. But, regardless of this the Rhizovator™ G2, plants still produced better yields on nine of the 13 strips above (indicated with blue stars).

Figure 19: Despite the higher yields in nine of the strips, quality were not negatively affected by these increases.

Statistical differences were seen for Treatment 5, which was the Rhizovator™ PC (test product), in terms of having the most vines that has grown to the top wire (Growth index = 4) – 53.57% at a 5% level for the Pearson’s Chi-square test – P = 0.05479. The vines in the control (54%) and Product 2 (50%) grew the slowest when compared to the average growth index of 3 (vines has grown half way up to the wire). The test product (Rhizovator™; 79%) had the highest amount of vines at average growth (index 3) or up to the wire (index 4). Product 1 was the only treatment that had vines growing laterally on the wire already. 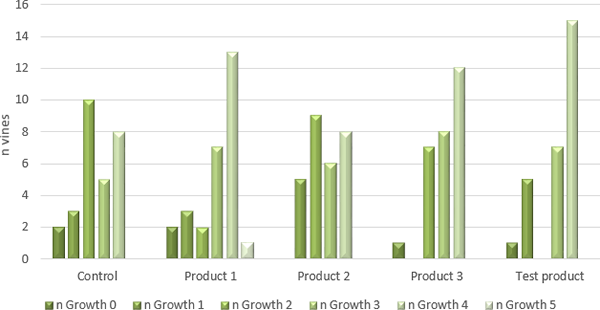 Figure 20: Growth index representing the amount of vines (n = 28) reaching a specified index (as set out in Table 1) height per enhanced growth treatment.

Figure 21: Vine growth – total length added as well as average growth – of the vines reaching a specified index (as set out in Table 1) height per enhanced growth treatment. The test product (Rhizovator™) statistically differed from the control with the Fischer’s LSD test. The stem diameter of the test product’s vines were also 9.5% thicker than that of the control vines. 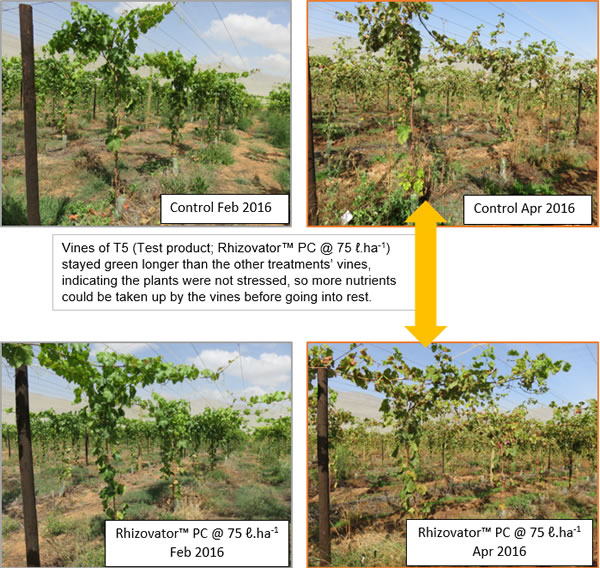 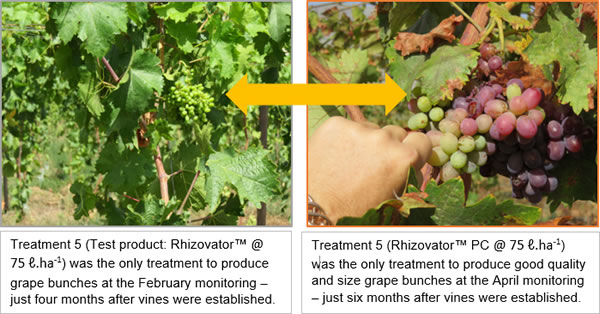 T5 (Test product: Rhizovator™ PC @ 75 ℓ.ha-1) was also the fastest growing treatment during the 2016 season, even though the difference was not statistical this time. The faster growing vines also did not impact on the yield of the vines. During the 2016 season a sixth treatment was added – Rhizovator™ PC at a very high rate (T6). The lay-out stayed the same for the 2016 season and vines received a second season of treatments similar to the 2015 season. T6 was slotted in between treatments where the buffer sections were.

Note that there are now a T5 treatment referred to as test product, which is Rhizovator™ PC applied @ 75 ℓ.ha-1 and then there is a T6 which is referred to as Rhizovator™ PC. The T6 application rate was however very high (240 ℓ.ha-1) compared to the current recommended rate of 75 ℓ.ha-1. Although T6 was only applied for one season (2016), it produced the highest amount of coloured grapes and all the treatments had more coloured bunches and bigger grape berries than the control. The amount of small green berries of the control was double (41%) that of the rest of the treatments.

Treatments 5 and 6 produced the same yield even though T6 received only one season’s worth of applications and that was three times the amount of T5’s application rate, thus indicating that 75ℓ Rhizovator™ PC.ha-1 is adequate for newly established grapes. Product 1 produced a statistically higher yield than that of Product 3 with a LSD (α = 0.05) of 1.919. Considering that these vines were only 17 months old when they produced their first yield, it produced good yields as can be seen in Figure 23 and Table 2. 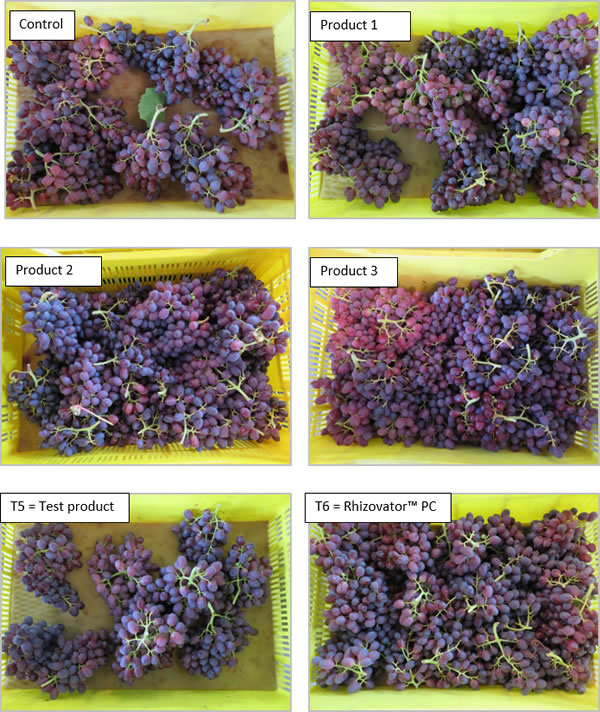 Rhizovator™ PC on cherries in the Western Cape

Rhizovator™ PC was also applied to newly established cherry trees which did not grow properly - so much so that some of the trees died even though all the trees were treated similarly by the producer. Therefore different application rates of Rhizovator™ PC were tested with very interesting results. A Latin square layout with six different application rates were used. 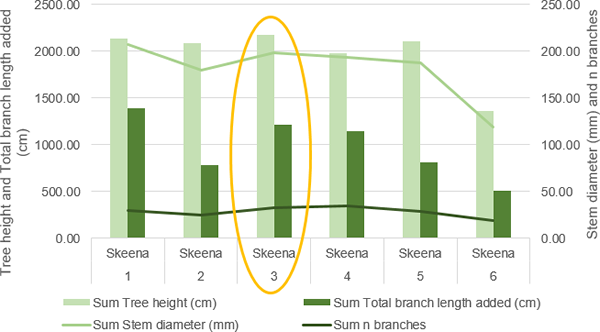 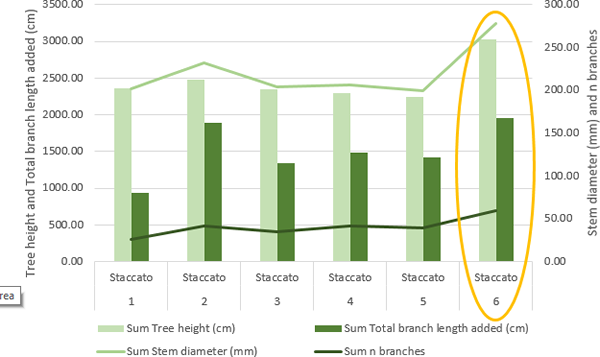 It was interesting to see how clear the differences between the cultivars were in terms of which application rates they preferred. The next step will be to calculate if it will also be economical as well as practical to differentiate applications for the different cultivars if the product is applied through the fertigation system. It is also interesting to note that both cultivars clearly did not favour the practice of increasing the application rate of Rhizovator™ PC.

Note on the application of Rhizovator™ PC.

The benefits of using Rhizovator™

Rhizovator™ is a dark brown liquid with a density of 1.1 that is applied during establishment or planting. The product is placed over or next to the seed/ seedling/ cutting with a buffer of at least 2cm of soil. The product should never be placed in contact with seed.

The application rate varies between 4 liters and 12 liters per ha, diluted with water at least 5 times. Refer to the specific recommendations for use on the label or with the bulk product.

Speak to your Omnia agent or agronomist to join the revolution today!