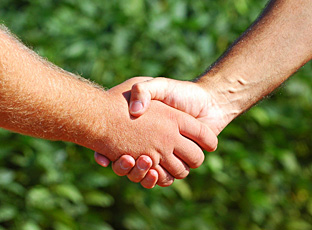 With the value of pure phosphorus in fertilizer form at above R30.00/kg and thus the value of one part per million (ppm) thereof in the field at more than R200/ha (excluding return on crop response), the South African farmer needs to be very aware of his choice of phosphorus source. Due to its increasing scarcity in the world, phosphorus has been called the “noble fertilizer element”, or even “life’s bottle-neck”. So, not only is the source of phosphorus important, but also its management in the field. The correct choice of phosphorus management under different crop soil conditions is of the essence. This short article will illustrate the benefits of a unique phosphorus source manufactured by Omnia Fertilizer, optimizing efficiency and reducing risk of crop yield and quality loss.

Maxi Phos is a unique phosphorus source manufactured in a unique process. During the production of Maxi Phos, South African Phalaborwa rock phosphate is treated with three acids and then partially ammoniated. The three acids involved are nitric, sulphuric and phosphoric acid. This results in a product that is formed which contains two primary forms of phosphate: mono calcium phosphate (super phosphate) and mono ammonium phosphate (MAP). The production process is highly specific and ensures a product rich in secondary elements such as calcium, magnesium and sulphur, with a high water solubility (93%) and full citric acid solubility. Maxi Phos is also enriched with zinc.

As Maxi Phos contains both MAP and super phosphate, it lends itself to be used most efficiently on several soil types, from acid fixing soils through sandy soils to high pH and free lime containing soils. MAP is highly soluble and has an inherent pH of approximately 4.5, while single super phosphate is also highly soluble, but reacts with soil calcium to form di-calcium phosphate, continually releasing phosphoric acid.

Under acid soil conditions where there is a large presence of hydrated aluminium and iron oxides, phosphoric acid (pH<1) might solubilize these oxides, causing the precipitation or fixing of phosphorus as complex iron and aluminium phosphates which is stable even under these low pH’s. MAP, with a pH of 4.5, will not solubilize the mentioned oxides and fixing will be reduced (depending on the inherent pH of the soil). At the other extreme where phosphorus might be fixed due to high pH and free calcium presence, super-phosphate will ensure phosphorus availability to plants due to its ability to continually produce phosphoric acid which will ensure phosphorus to remain available as such and as complex water soluble calcium phosphates. MAP is also available under high pH conditions, but not to the extent of super phosphate. In acid non-fixing soils low in clay, both MAP and super phosphate are also available, but super phosphate containing calcium, sulphur and even magnesium will be more efficient per unit phosphorus simply due to the availability of these secondary elements. Recent trial results in Omnia have shown agreement with international literature, that a super phosphate containing phosphorus product outperforms pure MAP by more than 15% in soils deficient in calcium, magnesium and sulphur.

The efficacy of MAP and super phosphate, as mentioned above, is well documented in scientific literature. Figures 1, 2 and 3 illustrate such efficiency rates. Photo 1 shows a strong response to mono-calcium phosphate (super phosphate) under alkaline conditions. 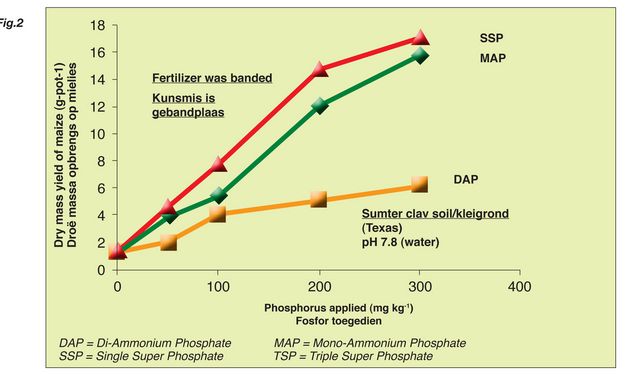 FIGURES 1 AND 2: The figures below illustrate the benefit of the MAP component within Maxi Phos in acid to neutral soil (Fig. 1), while its super phosphate component ensures maximum efficiency in calcareous soil (Fig. 2). 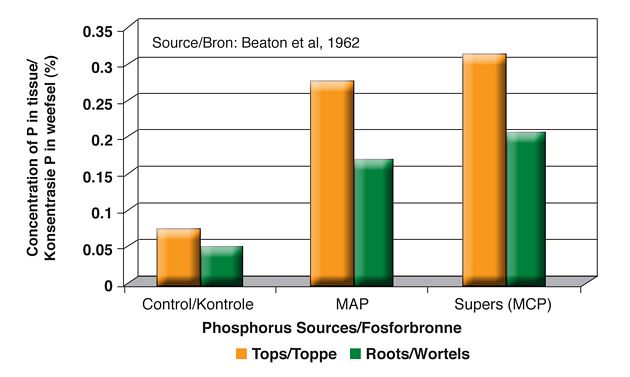 FIGURE 3. The superior uptake of phosphorus from superphosphate in an alkaline soil. Alfalfa was the test crop

To summarize, Maxi Phos contains almost an equal ratio of MAP and single superphosphate, making it a most efficient versatile source. It contains 18% phosphorus, 8% nitrogen as ammonium, 5% calcium and 4% sulphur. It also contains 0,5% each of magnesium and zinc.

So ensure maximum efficiency from your phosphate fertilizer by using Omnia’s Maxi Phos!

Bornman, J.J. 2012. Efficacy and application of phosphorus sources. “Turning old and new bones.” Proceedings of the Technical Symposium of the Fertilizer Society of South Africa, Pretoria, 22 August 2012. Pages 47 to 87.

This article was published in the Nutriology® Newsletter (Summer 2013).