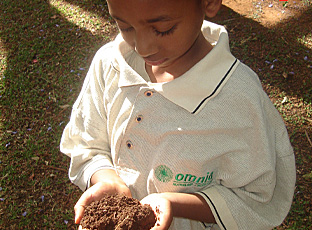 For the kids and those young at heart

His grandfather said it’s like getting Springbok colours. His father believes it’s a calling. But he just knows that it’s his destiny. Many like him dream their whole lives of working on the farm one day and helping to grow crops. And today he, Cassie, will find out if he made it. If, after all the hard work, sweat and dedication, he will eventually qualify to become an Omnia fertilizer granule and go and make a difference on the farm.

He still remembers the difficult journey as if it was yesterday. It started with the strict instructors. He was told that they were some of the best engineers, chemists and agronomists in the world. From the beginning he was taught to feed himself with only the best raw materials.
Young would-be fertilizer granules were forbidden to mingle with bad influences. The heavy metal gang was difficult to avoid. He knows these gangsters by name: Arsenic, Lead, Mercury, Cadmium, Selenium and Chromium. One has to be careful, because they sneak in when you least expect it. Cassie also had to make sure not to over-indulge in micronutrients.

But he was taught well. He never gave in to temptation and remained pure until the end. At that stage Omnia was already impressed with his progress. He also followed the rules very diligently; take exactly the right dose of nitrogen, phosphorus, potassium and zinc every day, with a bit of calcium every now and then. The older granules have always spoken about Act 36, but his instructors made it clear that the farmers has to get what they’ve paid for. This motivated him to pass his chemical tests with flying colours.

But Cassie knew; this was where he would have to show whether he had what it takes. To become an Omnia fertilizer granule, his good chemical quality was not the only requirement anymore. He would also have to be physically strong. These tests were very harsh. He had to be between 2.36 and 4 mm in size, not have any bits that broke or rubbed off when he pushed againsts his mates, and he had to have less than 0.05% of dust on his body.

So far he was able to hold his own. Omnia was still satisfied. Now he just needed to pass the last two tests that everyone was so afraid of. The instructors called it granule hardness and caking tendency, but what he understood was that they shouldn’t stick together when they’re squeezed hard against each other in a bag. And they have to be strong. Really strong. The laboratory people place a 3 kg weight on your head, and you’re not allowed to break! He heard that, if you are strong enough to hold a 3 kg weight on your head without breaking, you will also be strong enough to withstand the 1.3 Bar pressure exerted by a modern planter during application. That was exactly what an Omnia fertilizer granule wanted to hear!

Cassie was very nervous before he was given the good news. He knew he had done well, but it was a good feeling when Omnia gave him the green light. His grandpa will be so proud! Now Cassie can also help feed the world and become part of the proud Omnia tradition!