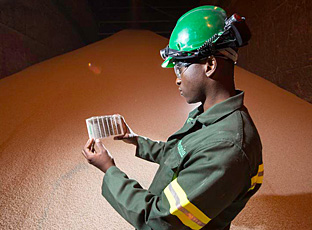 His grandfather said it’s like getting Springbok colours. His father believes it’s a calling. But he just knows that it’s his destiny. Many like him dream their whole lives of working on the farm one day and helping to grow crops. And today he, Cassie, will find out if he made it.

Omnia’s chemically granulated products are fertilizers specifically manufactured at our unique granulation facility. Within these products, internationally known as compounds, each granule contains exactly the same amount and ratio of plant nutrients as is registered for the pro duct as such.

Omnia’s fertilizer is safe to use

When exporting produce from South Africa to the European Union (EU), all products are sampled and analysed for traces of certain pesticides used during the growth stage.

Ammonium toxicity damages plant roots and water-conducting (xylem) tissues. As the xylem collapses and roots are damaged, water uptake is restricted and wilting and stunting occur.

The benefits of chemically granulated fertilizer

Omnia is the only company in South Africa that continues to chemically granulate fertilizer and in such a unique way.